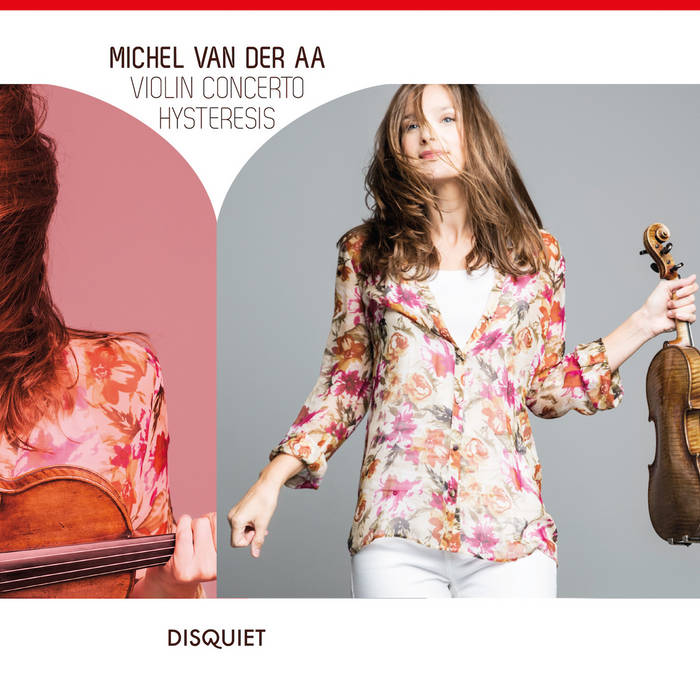 Van der Aa confronts his audience with Escher-like distortions of perspective in the acoustic reality. The distinctions between the real and the synthetic blur into an aural maze, precise but beyond comprehension, in which the ear, seduced by virtuosity, is left hunting for the other and the self. The dramatic aspect of this interchange forms a thematic idée fixe, permeating his works for the musical theatre and also the ‘concertos’, of which the Violin Concerto (2014) may possibly be the first that can be referred to without using quotation marks. Van de Aa composed the work, on a joint commission by the Royal Concertgebouw Orchestra and the Bergen Philharmonic Orchestra, more than literally for the soloist Janine Jansen; it was deliberately written to suit her. Van der Aa describes her unreservedly as ‘the protagonist’ of the work, which may be described as a playful analysis of her ‘musical anatomy’. Her concerts and YouTube videos persuaded the composer that it was the ‘theatrical quality’ of her execution, even more than her self-evident virtuosity, that ought to be the point of departure for the piece.

The work turns on those facets of her playing that transcend mere technical mastery. He investigates what he describes as her ‘musical DNA’, primarily the energy that players of her calibre transmit to their musical partners as a matter of course. This starting point sets the tone for the concertante repartee between the soloist and the orchestra. Rapid tonal figures from the violin are taken over first of all by the musicians sitting closest to the soloist. The principal cellist and the orchestra’s leader both play pivotal roles in this transfer, forming a ‘mini trio’ with the soloist, physically in the midst of the orchestra, in the central movement. ‘I do this partly to keep the music transparent where I want to feature Janine specifically and partly to give the listeners a theatrical experience of the energy flow among the players.’
Janine, according to Van der Aa, ‘can do things you don’t get so readily from other players. It has to do with strength – power in those passages where she has to use her entire body to enhance lyricism with a sort of percussive edge. Those notes – something extra happens at these most difficult moments that wouldn’t with someone else, something theatrical that transmits straight to the audience. She does this out of a sort of physical-biological compulsion that I recognise, since that’s also what composition means to me.’

In Hysteresis (2013) for clarinet, ensemble and soundtrack, premiered in London in April 2014 by clarinettist Mark van der Wiel and the London Sinfonietta, the concertante element also serves as backdrop to an investigation of sounds at the interface between analogue and digital, of sounding reality and processed memories that subsume the material within themselves, like the carrier of a musical gestation.

It opens, symbolically, like a clash between two worlds. The clarinet sets out like a fairy-tale figure stepping out from a painting, amidst an aura of clicking and rustling sounds on soundtrack and a percussionist stroking his hand in circles over a table strewn with sand, emulating the sound of an old gramophone. But this does not release the soloist from the sound-annex memory module. The hysteresis is born from the confrontation between the live instrument and digital clarinet residues that take on their own lives over the course of the work, just as the clicking of the turntable is transformed into a digital rhythm. ‘Distant clarinet echoes’, ‘distant clarinets’, ‘A-Bb echo’, ‘turntable scratching’, ‘parallel chords’, ‘distant orchestra, slowing down’ – the soundtrack behaves like a wellspring that gives and takes, like an eavesdropper, a digital crossroads for incoming and outgoing signals, all set against the backbone of the modular analogue synthesizer that Van der Aa uses for the first time in this piece.

The clarinet, for Van der Aa a very special instrument due to the ease with which it can move between diverse stylistic poles and produce tones that are almost as pure as sine waves, is perpetually at the focal point of events thanks to the compact accompanying ensemble. And how! The orderliness of the concept is diametrically at odds with the completely spontaneous, exhilarating nature of the music, which excels in a jazz-rock kind of synthesis of improvisational agility and the physical drive of a rhythmic base line that inclines towards dance. The thing that connects the two pieces on this CD is the trans-cultural generosity of spirit that enmeshes the popular and the extremely complex with each other, in a language that has managed to liberate itself from the eternal friction between ‘high’ and ‘low’ cultures. One might argue that the composers of Van der Aa’s generation, rooted in pop culture, have moulded a new, cosmopolitan meta-language from an incongruous mix of the stylistic modes so feared by puritan modernists such as Boulez. And thus what is an inherently conformist genre can be heard here striding out along new pathways.

“Michel van der Aa (46) has done so much in the way of multimedia that you might almost forget he is first and foremost a first-rate composer. His latest CD, a superb performance of the violin concerto he wrote in 2014 for Janine Jansen and the Royal Concertgebouw Orchestra, underlines this fact. Although the work turns a lot upside down and transcends many boundaries, it is nevertheless couched in the tradition of the classical violin concerto. Balancing the soloist and orchestra to perfection, the works eschews hollow virtuosity entirely, and its orchestration is full but transparent.
The second work presented on the CD, Hysteresis, a clarinet concerto for chamber orchestra and soundtrack, is equally refined, but with its electronic doublings it sounds much more experimental. Here again, Van der Aa proves to be an eminent sound director.”(•••••)
— De Volkskrant, Frits van der Waa

“The Violin Concerto proves to be a fantastic work brimming with moments of beauty and consolation. All you need to do is take in the story that Van der Aa tells. What makes the piece impressive is the carefully constructed fluctuation between the lyrical and the energetic, which in our view includes the brief moments featuring pop beats. You simply have to be prepared for the speed with which the composer switches from one mood to another. Once you’ve got your bearings, a captivating and exhilarating discourse unfolds. Van der Aa tailor-made it for Janine Janssen, who gives a cracking performance.
Although Hysteresis is the triumph of the clarinet virtuoso Kari Kriikku, the work’s first movement, which is shot through with hysterical rhythmic impulses, does not leave the listener with much. Intriguing elements of the sound track are its ‘damaged’ sounds and the oscillating figures in the analogue synthesizer. With its start and stop beats, the second movement is more fascinating and the end is quite simply comic: as though the piece gets stuck when a feather jumps out of the machine.
— Het Parool, Erik Voermans

“Violin Concerto […] a searing clash between expansive sounds evocative of a lamentation and fierce passagework […] Brimming with new sound combinations and yet poetic […] sizzlingly exciting.
Hysteresis […] At the end of the second movement the sounds on the soundtrack practically seize the clarinettist by the throat. An intriguing element is how the music continually finds itself in a twilight zone between mechanical and acoustic beeps. Soundtrack and instrument open up new perspectives. Brilliant. ”(•••••)
— De Gelderlander, Maarten-Jan Dongelmans

“Concerto shows van der Aa in top form…Bluegrass, jazz and a wink at Tchaikovsky: Composer Michel van der Aa has rarely been so eclectic as in his new violin concerto premiered by the Royal Concertgebouw Orchestra. Written specially for Janine Jansen, the music embraced her podium charisma and vibrant body language as the only theatrical elements of the piece. This was interesting because much of van der Aa’s recent work has incorporated multi-media aspects.
Do you recognize van der Aa if he’s composing unplugged? Straight away! Sharp cutting sounds interrupt the brittle cantilena presented by the soloist accompanied by harp and winds. There ‘s a built in nervousness. Van der Aa’s enthousiastic reception by the young audience afterwards belied the serious, dark side of his writing- recurring lamento passages for Jansen’s violin in the middle movement, culled from earlier operatic works.
The third movement brings relief from the tumult and is a virtuoso showpiece for Jansen and the percussion section, an area where van der Aa’s writing excels. “Individuality” is not usually a characteristic of a good concert but it gives you goosebumps to hear how van der Aa ‘s contemporary idiom so convincingly relates to an “old fashioned“ genre. His concerto places the solistic qualities of Janine Jansen at the centre of the work and Vladimir Jurowski conducted the superb Royal Concertgebouw Orchestra in an ideal mix of clarity and theatricality.” (••••)
— NRC, Mischa Spel